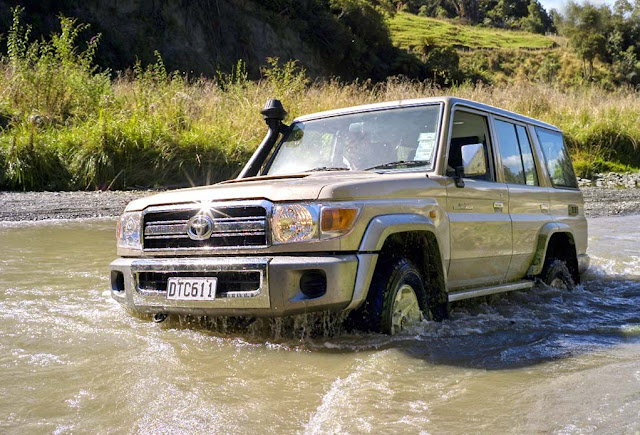 Land Cruiser 70 is one of the best wagons around for river work.

Talk about Land Cruisers and many people conjure up a vision of the big wagon, now selling as the 200 series, or even the Prado. But there’s another Land Cruiser and it’s easily the pick for those wanting a wagon with serious off-road ability. That would be the 70 Series Wagon LX, aka the “forgotten” Land Cruiser, the one you'll never see on the school run. The 70 traces its lineage back to the original Prado, which never came to New Zealand except as a used import and on the face of it, little has changed. It still has the same general lines, a similar interior (although the dash has been recently revised, not necessarily for the better) and retains the core values of strength and simplicity that make it ready to tangle with our toughest track conditions.

The highlight is its 4461cc V8 diesel, a remarkable unit also used, with a second turbo, in the 200 series. The motor produces 151kW and 430Nm of torque at 1200rpm which, with the well-chosen five-speed manual ratios, provides the exceptional flexibility that makes the wagon a joy to drive on and off the road. It will also return around 12-13 litres per 100km overall, which I rank as good for a relatively heavy V8 vehicle with the aerodynamics of an only slightly rounded brick outhouse.

It’s off-road ready right down to a standard snorkel and, to order, can be bought with factory cross-axle mechanical diff-locks that are still preferable to any of electronic traction control systems. There are, however, several things wrong with the wagon. The first is that, if you specify the lockers – as you should – its price will have crept over $80,000 so one can only hope the anecdotes about Toyota’s discounting are true. The second is that while it has now gained airbags it lacks ABS, which even off-road Luddites generally agree is worth having these days. The third is that it labours on with leaf-spring rear suspension which, although simple, cheap and capable of bearing a good load, lacks the articulation, handling and ride characteristics of a coil setup. The fourth thing is that it lacks an automatic gearbox. True, real men drive manuals but some of us pansies prefer an automatic both on and off the road. Two more niggles: The gearing is a bit low for highway driving and there’s  low frequency drumming from tyres on metal roads  that becomes tiring.

Everything else about the 70 wagon is superb if actual off-roading is your thing, rather than just thinking about it. The truck is bulletproof and reliable, which is why so many high country farmers in the South Island swear by the ute versions. Increased front track of the most recent version means there’s now little chance of a grease nipple spearing a sidewall on full right lock, one of the little things you had to be a bit careful about.