In praise of the Land Cruiser 200

I've been spending time with the updated Toyota Land Cruiser 200 and am full of admiration, except for two things, its price and its size. As far as price goes, you either have it or you don't but at $147,500 for the VX Limited I rather suspect that most of us don't. Can't do much about its size, which is only a nuisance off-road on tight tracks but I do fantasise about a version that's 20 per cent smaller – and 50 per cent cheaper! The 200 has so much going for it, from the 4.5 litre twin turbo V8 diesel (195kW and 650Nm between 1600rpm and 2600rpm) to some of the best off-road electronics on earth. The new model gets a useful feature called Offroad Turn Assist that in low range, in conjunction with Crawl Control (more or less a cruise control for off-road), judiciously applies brakes to tighten the turning circle. It was a wonderful aid for getting around some of the tight spots in the Jeep Woodhill 4WD Adventure Park. The traction control finds and works with the slightest bit of grip and I was impressed by how well it tackled slippery mud on its 285/60 x 18 street Yokohama Geolanders, their tread completely clogged. Meanwhile, the Cruiser now has Multi-Terrain Select, a knob that allows the user to optimise the engine, transmission and suspension for different types of terrain. A nice touch, I guess, but I'm not sure how much difference it really makes. Several times I deliberately chose the wrong setting for the terrain and got through just fine.

The engine (right), connected to a six-speed Tiptronic-type automatic, is superb and thanks to all that torque across a wide band never needs to be pushed hard. Not only that, I drove to Woodhill, had a day's worth of reasonably serious off-roading and drove home for 14.9 litres per 100km, way better than my V6 petrol Wrangler Rubicon could ever do. The official rating is 10.3 litres per 100km, overall.

All that and a fridge in the console between the front seats; what more could you want in a 4WD? 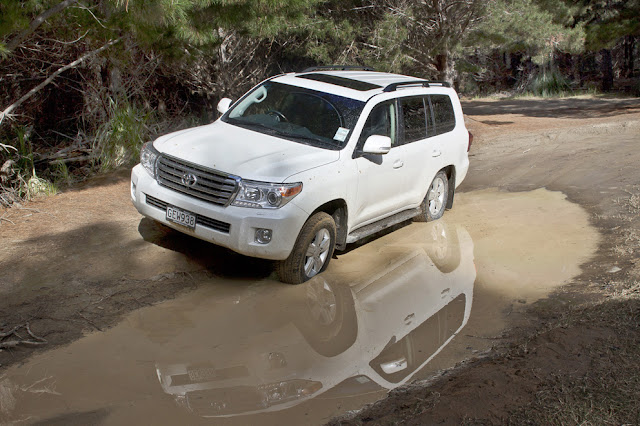