4wdNewz is no longer active. However, there's a wealth of useful information for off road enthusiasts among its almost 750 posts, so please help yourself. Just type keywords in the search panel at the top left of the page.
at 9:35 AM 7 comments:

Not such a merry Christmas season for recreational off-roaders

All you need to know about the state of recreational off-roading, at least in the North Island.
From the new issue of the NZ Four Wheel Drive Association's publication, Trail Torque.
at 1:13 PM 1 comment:

Your EPIRB is really a PLB

Personal Locator Beacons, or PLBs, are one of those those potentially useful things to carry on 4WD trips, especially for those mad enough to go out alone. EPIRBs are marine versions that are registered to a boat. Thanks to the latest Auckland 4WD Club magazine for pointing out the difference.
at 2:12 PM No comments:

Toyota's 2.8 litre Prado – does the new engine deliver the goods?

Today’s trivia question is what do the Toyota Prado wagon and the next Hilux ute have in common? They both share Toyota’s new 2.8 litre Global Diesel four-cylinder engine. Who cares? Anyone who has complained about the Prado’s outgoing 3.0 being underpowered, noisy, agricultural and even unresponsive. When introduced, nobody thought any of those things about the 3.0 engine, but diesel technology, and the engineers’ understanding of how to tame their less desirable characteristics, moves quickly these days.

So the incoming 2.8 is a “clean sheet of paper” design that’s loaded with innovations, big and small; like a more rigid block that allows fewer head bolts, freeing space to optimise the head port shape for better fuel flow. Significant effort reportedly went into tuning the sound of the engine and cutting decibel levels to appease those who thought the 3.0 seemed to be, in technology-smooth 2015, a bit on the rough side. Was it worth the effort? Sort of. The test VX Limited Prado was certainly quieter, smoother and a little more responsive than the 3.0. However, the improvement is incremental rather than epiphanic. Think of it as icing on the specification cake rather than a whole new recipe for the country’s top selling medium SUV. 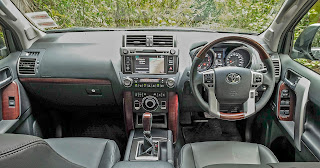 Plenty of differences don’t show up in the figures. For example, the timing belt changes to a life-of-the-engine chain and there’s a secondary high pressure fuel filter to help protect all those expensive and precise fuel system components that owners never think about until they go wrong. The engine is mated to a new six speed automatic, with sequential shift; a worthwhile improvement over the five-speed it replaces. First gear is similar to the old unit’s, but the final is taller, for relaxed and more economical cruising. Otherwise, with a specification tweak here and there, it’s still the Prado we know and apparently love, right down to the VX Limited’s dark wood trim and sombre greys of an interior that might suggest you’re riding along in granny’s sitting room.

But step off the formed road and onto a track – let’s choose quite a difficult track to make the point – and the wagon wriggles free of its antimacassars and doilies to morph into Outdoors Action Man. The Prado is brilliant off road and the more difficult the track becomes, the better it seems to answer the call.  It’s been that way since Prado first appeared in Toyota New Zealand’s pricelist in the mid 1990s, replacing the Hilux-based 4Runner, but back then it looked half-way like a track-ready 4WD. Amazingly, as the Prado transitioned over the years into a more generic design and became plumper and more street oriented, its off road abilities have just become better, rather than losing their edge. 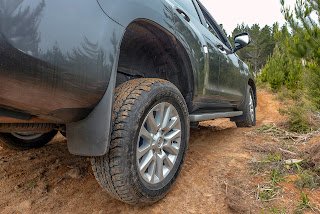 An indication of how seriously Toyota takes the off-roadability of Prado is an indexed 154-page supplementary manual in the glovebox dealing exclusively with the wagon’s 4WD systems and how to use them correctly. The wagon’s biggest problem off road is its size; it’s too big to comfortably squeeze down some of the tracks and trails frequently encountered in the back blocks.

On the road, the Prado behaves well, within the context of a large-ish SUV. Ride is excellent, the engine unobtrusive as it cruises along, thanks in part to the sixth gear in the transmission. Handling above average for its genre, especially the two VX models that have the Kinetic Dynamic Suspension System (KDSS). This does a good job of adjusting front and rear stabiliser bars to lessen body roll. 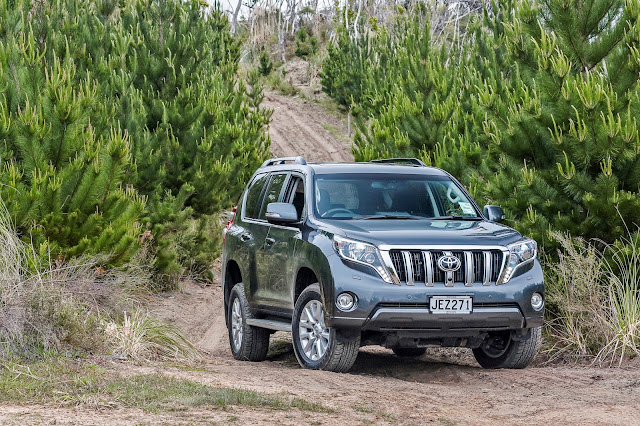 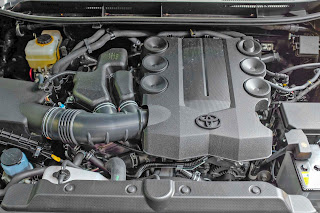 As noted above, Toyota continues to offer its 3956cc GRXA V6 petrol engine in one VX specification version of the latest Prado, while the other three in the lineup have the new 2755cc four cylinder turbodiesel, also fitted to the latest Hilux. The V6 is offered because Toyota says there is ongoing demand for it, but will the smoother new diesel unit eat into that demand? Probably not. The diesel still can't match the V6 for silky smoothness and some drivers just like the sound of the petrol engine which, in the Prado's case, is quite appealing. 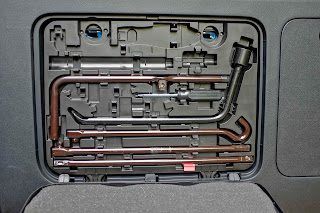 Speaking of the Prado, look at this nice toolkit hidden behind a panel on the cargo door. The tools are in a separate case that can be easily removed – you don't need to keep going back to the door.
at 10:31 AM No comments:

Rare beast at the Auckland Zoo 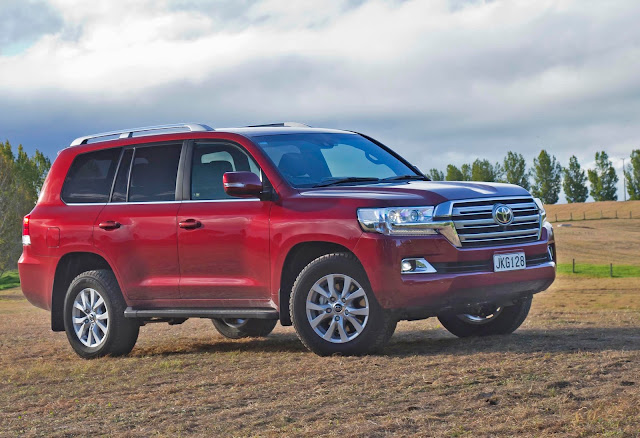 The revised 2016-model Toyota Land Cruiser has gone on sale, the top VX Limited model carrying a $143,990 price tag, the "entry" VX at $121,990. You can tell the updated Cruiser by its reshaped grille, bumper, headlights, bonnet and LED tail light clusters.

The cabin of VX Limiteds have a new rear seat entertainment system with dual 11.6 inch monitors and two infrared wireless headphones. Rear passengers can tune into a different audio track or DVD sound from the front seat occupants. 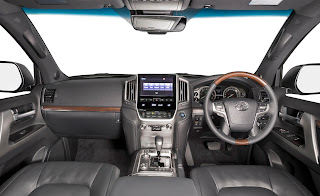 So that's the important stuff. What about making it a better off roader? Well, not too much unless you think new 18-inch alloys with 285/60R18 tyres might help.

The 4.5 litre twin-turbo V8 engine now produces an extra 5kW for a 200kW total and combined fuel consumption has dropped to 9.5 litres per 100km from 10.3. A diesel particulate filter has helped the engine achieve the EURO 5 emissions standard. 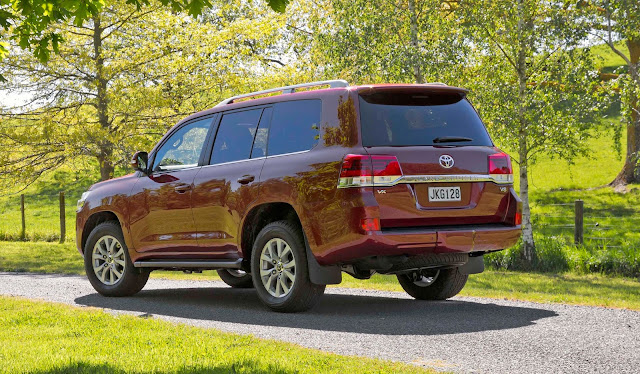 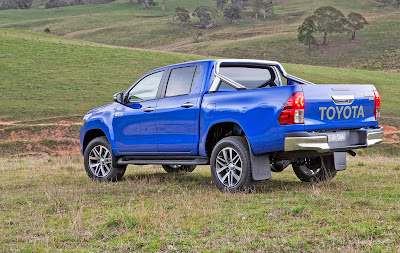 Toyota has been drip feeding information about the next Hilux for months and has now even released pricing. It will be available in four specification grades, the 2WD S, the SR "working"model and the urban friendly SR5 and SR5 Limited.

New Lexus LX 570: at least there's no mistaking its nose 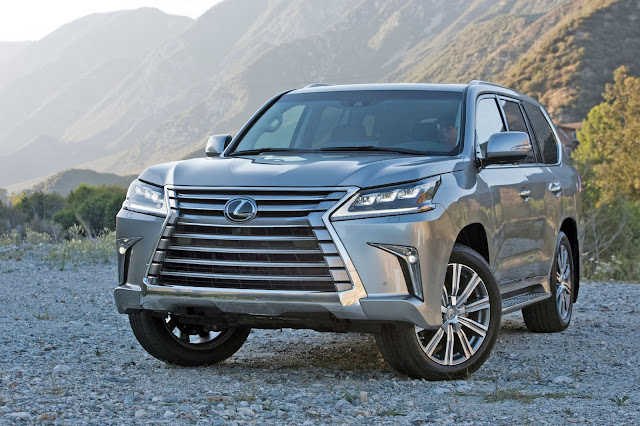 Here's the next Lexus LX 570, which has had a major redesign Only the door panels were carried over, says the company. Highlights include 10-spoke, 21-inch alloys and an eight-speed automatic, replacing the six-speed. A driver can now tailor the powertrain and suspension for a variety of on- and off-road conditions, in addition to the standard alternatives found on the mode selection dial. Inside, there's new wood trim and heated and ventilated second row seats, standard Park Assist and a larger 12.3” screen, which is also used by the Satellite Navigation.
at 12:45 PM 2 comments: 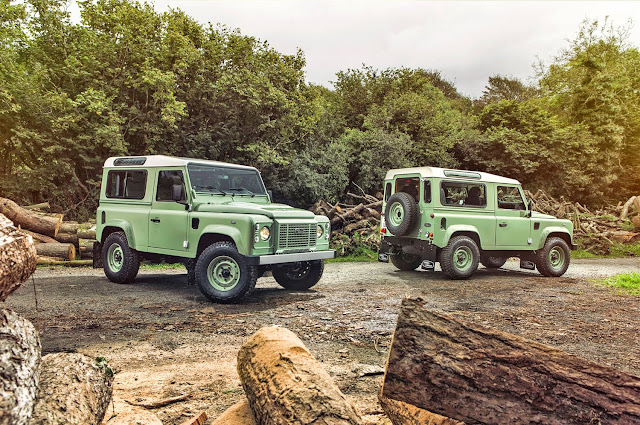 Deliveries of Land Rover's Defender Celebration series to New Zealand customers start this month. The local distributor was allocated nine Heritage models (above) and seven Adventures. "To say these special editions have been popular is probably the understatement of the year," a spokesman told 4wdNewz. "We could have sold our allocation many times over." The deliveries don't suggest the Defender's replacement is close. "We don’t have anything official on its replacement, which means it won't be in the next two years," the spokesman said.
at 10:25 AM 1 comment:

Australia may be getting the Hawkei, but we already have the D-Max

One reason why they call it the Lucky Country 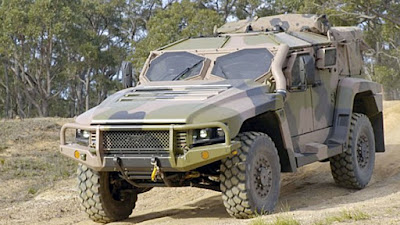 Sure wouldn't mind taking one of these mean boys out to the forest and bully some Suzukis. The Australian Defence Force is getting 1100 of the Hawkei 4x4 light protected mobility vehicles (it's named after a snake) to replace most of its unprotected Land Rover fleet. The Hawkei, designed by Thales Australia, will be built at its Bendigo factory in Victoria. Pilot production will begin early next year as work on the Bushmaster protected mobility vehicle winds down. First deliveries are scheduled towards the end of 2017.
at 1:30 PM 1 comment:

Mazda BT-50 goes back to the basics

Unlike the Ford Ranger (below) Mazda has been conservative with its BT-50 facelift, even dropping its top Limited model in order to concentrate on the core fleet, farm and trades segments of the market. Like the Ranger, though, there's nothing in the upgrade that's going to make it a better off roader, unless you're trying one of the 2WD variants that now all have a rear diff lock as standard.
at 2:36 PM No comments: