Colorado: Holden leaps into, if not ahead of, the ute fray 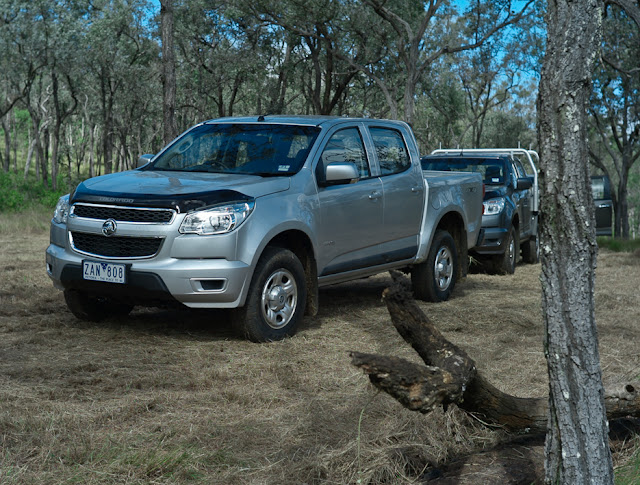 Still high on the technical prowess of the Ford Ranger, Mazda BT-50 and, to a lesser extent, the Navara ST-X 550, I could hardly wait to see how Holden has moved the ute sector forward with its new and much anticipated Colorado. After all, the global design and engineering resources of General Motors are still formidable and there must have been some impressive talent assembled at the corporation’s design centre in Sao Paulo, Brazil. That country, by the way, is the Colorado’s biggest market seeing that like its Ranger arch-rival it won’t be sold in North America.

What we got, however, is not a ute that will have Ford and the others cowering, but a thoroughly conventional vehicle, largely devoid of innovation and without things like trailer sway control, rear diff lock and hill descent control that appear as either standard or options on the Ford-Mazda products. Except for a couple of things, you might as well just buy a Hilux like everyone else does.

And Holden's claiming a one tonne payload for all Colorado models. Many "one tonne" trucks offer a capacity that falls short of the magic mark, a number of them well short. Some Colorado variants can take up to 1.4 tonnes. All have a 3100kg gross weight. The 3500kg braked towing rating of all 2.8 litre models is the best in the business, matched only by ute versions of the Land Rover Defender. Some rivals have cracked the 3000kg barrier, but Holden holds the bragging rights. The rating was achieved partly by fitting what Holden calls the “beefiest, brawniest towbar” the company has ever made”. All Colorados have an unbraked towing rating of 750kg, the same as their competitors.

Other inducements to buy include wider availability of automatics, electronic stability control on all models and competitive engines. The 2.5- and 2.8-litre units developed for Colorado were designed by VM Motori of Italy (as known to Jeep owners) with significant input from the United States. Dubbed Duramax, the 2.5 produces 110kW and 350Nm of torque and the 2.8 has 132kW and 440Nm of torque for manual versions, 470Nm for automatics. The 2.8 litre engine, fitted to all but the base model, offers overall fuel consumption of around 8.5 litres per 100km, depending on the vehicle, and CO2 grams per kilometre emissions in the low 200s. Colorado is the first global model to use these engines, which share a similar architecture. The engines smooth, refined and compare well to their rivals.

The ute has bold exterior styling and is better looking than photos suggest. Its interior is pleasant but unremarkable. Although rear legroom in double cabs is better than the previous model, the interior lacks some of the clever storage spaces of the Ranger and BT-50.

On-road, the Colorado performs competently and handles predictably. Its unladen ride can be harsh, but no worse than some rivals. Off-road during the launch programme in Queensland it acquitted itself well, but the route was doubtless set up to make sure any fool could drive it.

Colorados will be sold in New Zealand in four spec levels, starting with the $38,400 DX single cab-chassis. It’s well equipped for a starter model, including aircon, power windows, Bluetooth and electronic stability control. The LX wellside, from $49,900, moves up to such equipment as buckets and carpet, electric mirrors and cruise control. The LT, from $55,900, provides an automatic option, upgrades to 16 inch alloys and has foglights. The LTZ that starts at $58,400, is intended for lifestylers and has a full complement of stuff, including 17 inch alloys and the alloy sports bar bolted to the tray.