Goodyear treads outside the block 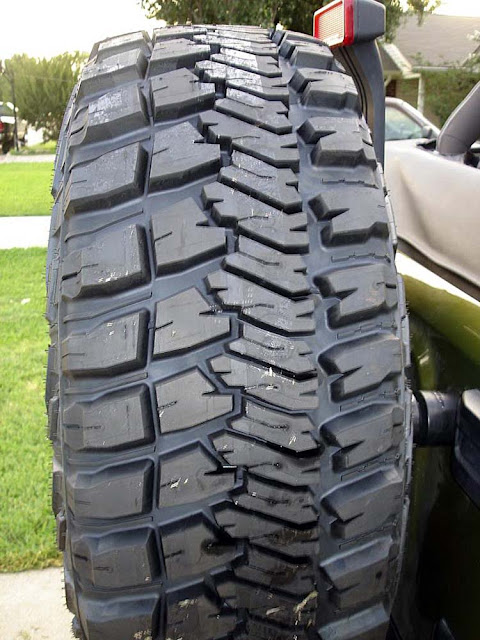 One of the challenges for 4WD tyre designers has been to develop a mud pattern that drives, rides and handles like a street tyre, yet does the deed in the muck. Goodyear has advanced the game with a fascinating new version of its Wrangler MT/R mud tyre. Its engineers and scientists showed a flash of brilliance by using an asymmetric tread design that incorporates aspects of both a mud tyre and an all terrain. An asymmetric tyre is one whose tread pattern does not form in-line symmetry with its central line. It lets designers take into account the kinds of work done by the shoulders, sidewalls and different parts of the crown. Michelin, a pioneer in asymmetric street tyres, once noted:  “Just like a person’s foot is asymmetrical, the inside and outside of a tyre work differently to give the car good balance and sure handling.”
So starting at the inner side, the Goodyear “foot” has a row of chunky lugs to help dig through the mud, then a strip of highway-friendly tread followed by a strip of typical mud terrain tread, capped by an outer strip of bold lugs, with an open tread pattern spilling down the sidewalls for useful side traction. This last feature was similar to the previous Goodyear MT/R design and several other manufacturers use variations. Each shoulder block is stepped “in” and “out” to help give continuous biting edges as the tyre turns through mud, although that feature’s by no means unique to Goodyear.
I was given access to the results of some in-house Goodyear testing that showed the asymmetric outperformed its predecessor in mud, sand, rock crawling and off-road handling and “significantly” outperformed it in sidewall traction. It also significantly outperformed its predecessor in wet stopping, wet start-up traction, wet and dry handling – all the good things you need on-road – and in all areas of sidewall toughness, thanks to Kevlar reinforcement.
The design is inspired. I’m willing to lay a modest wager that the MT/R may become a blueprint for the generic mud tyre of the future. I’m running a set of 17s on my Wrangler Rubicon (yes, I did pay for them) and will report back from time to time. Initial impressions are really positive.

Update: A number of people have doubted that the tyres are any good in the mud because the "all terrain" bit won't self-clean well. That may be, but take a look at those side lugs; they're big, bold and self-clean like crazy. My experience so far is that in mud they're at least equal to the BFG Mud Terrain, with which I'm particularly familiar. But if you're a competition or super-tough-truck guy, no, they won't mud-plug like your Centipedes.
at 12:09 PM