The report they wouldn't let me write … 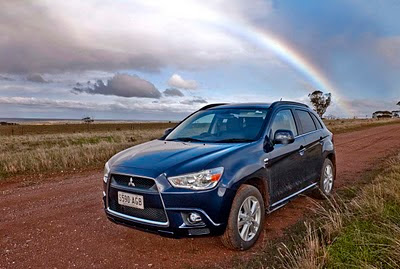 Well, not quite. Back in July I went to Adelaide for the long-lead launch of the Mitsubishi ASX. This was for the benefit of  Australasian magazines with deadlines that don't lend themselves to quick reporting, like newspapers or websites. I was there for Top Gear NZ. However, there has been an embargo on the event until now, so I wasn't able to report on what I found out about yet another crossover vehicle. 4WDNewz is not really about soft off-roaders and my original intention was not to bother; however  …

The ASX is a cracker of a vehicle and all things considered, including pricing, would probably be the one I'd have if I wanted an all-round vehicle capable of exploring the odd track and trail that wouldn't challenge its low ground clearance. Offered in both two- and four-wheel-drive and based on the Lancer-Outlander platform, it's roomy for its dimensions, nicely fitted out, and has excellent ride and handling. These last two attributes are of a much higher level than you'd expect in a car costing in the high $30,000s. I had a great time pushing the thing quickly but safely along rain-dampened clay roads leading from the Adelaide Hills to the Barossa Valley. (The 'but safely" bit was due to an excellent chassis and the ESP, not my skill.) Its 1998cc petrol motor, similar to Lancer’s, produces 112kW in ASX-tune and 200Nm of torque at 4200rpm. An optional 1798cc diesel – a newly developed engine – has the same power output as the petrol but offers 305Nm of torque between 2000rpm and 3000rpm. It’s being introduced with a six-speed manual, but Mitsubishi has a twin-clutch automatic coming in about a year. All versions of the petrol engine use a CVT automatic. If I were buying, I'd wait for the auto diesel.

Say what?: Anyway, I was expecting Mitsubishi's TV commercial to show the ASX racing along the beach at the tideline, or bouncing up some hilly track; it would be good for those sorts of things. But no, it shows an Aussie couple going for a feed in a back-lane pizza joint. Jeez Bazza that's an odd choice, they could do that in an old Starlet and it wouldn't matter if some wanker keyed it while they were inside getting their feed.

MID-SEPTEMBER UPDATE: I've been driving a couple of ASX models on New Zealand roads and have concluded that its abilities are a bit wasted around town. Out on a winding, unsealed rural road its suspension really comes alive and enthusiasts will be pleased by the way its electronic safety police let the driver get the tail out a bit before intervening. Around town, it's fine but you're only getting half the car, the dull half.
at 10:23 AM