A 132-page Amarok brochure – or is there more to this book?

Out There North
A 4WD Adventure in New Zealand's North Island 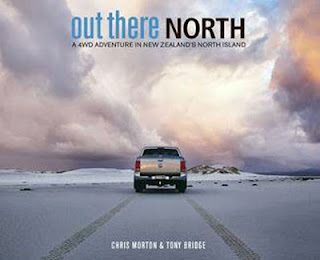 It's taken a while to catch up with this coffee table book, published earlier this year. Still being seen by most publishers as not important enough to receive review copies, 4wdNewz has to beg, borrow – but so far not buy – new 4WD titles. The question is, has this wait been worth it? Out There North is beautifully produced but it reminds me of a Chinese meal that looks wonderful, promises much but leaves you hungry for more just 20 minutes after eating it. The book tries to deliver too much on one plate and ends up not dishing up a big enough helping of anything.

On one unfortunate level, it's no more than a giant brochure for the Volkswagen Amarok ute, which had just been introduced here when the team behind the book struck a deal to use a fleet of (it seems) three for the North Island adventure. The result is that almost 60 per cent of the pictures contain an Amarok sitting there or doing something and the text is full of descriptions of the vehicle's prowess. For example: "Another ardent double cab user [farmer Snow Brownlie] is fascinated by the Amarok and takes a few brochures. What do we think of the ute? Great. Has it proved itself? Absolutely." The italics are mine. Almost the only negative seems to be that it was a bit wide for the 42 Traverse, but one assumes that was the fault of DoC for making the trail too narrow for a vehicle spanning 2228mm at its outside mirrors. No disrespect to the Amarok, but I'd have enjoyed the book much more if the team had assembled a fleet of different vehicles and was able to contrast their strengths and weaknesses – and provide more variety in the pictures.

On another level, the book provides insights to life in parts of the country only accessible by 4WDs or to people in 2WDs who are happy to press their luck. Tony Bridge's text does this well for the most part, but there's not enough of it. I wonder how many more interesting observations and vignettes could have been included by chopping back on the Amarok adoration? Or leaving out the too-frequent pointless chit-chat information that nobody gives a toss about: "We have time to unpack … Nick's family own a bach at Hauparu Bay … where we can spend the next two nights. It doesn't take long to unload and get ourselves sorted out. Apart from the trip up the mountain tonight and in the morning, tomorrow will be a day off, an opportunity to rest and restock our supplies and for Chris and I to go over our photographzzzzz …" Fortunately, such pointless dross is balanced by some superb writing; I'm thinking particularly of the chapter on driving through Army land at Waiouru, the best account I've read about off roading on this great tract, transcending anything I've seen in the country's two 4WD magazines.

On yet another level it's a picture book, capturing the moody grandeur that is the New Zealand back country. Picture books of New Zealand scenery are thick on the shelves, but Out There North acquits itself well on the image front, particularly in the Waiouru and Ruapehu chapters, which are also largely free of bloody Amaroks. Mind you, it's good to see iphotos of 4WDs that are technically excellent, well composed and superbly printed (in China, of course). Their work just shows up the visual slop that's served up most of the time by the local 4WD mags; if only they'd spring a few bucks for a copy of 4x4 Australia to see how it should be done.

All of the areas covered in the book should be known to anyone with a portfolio of 4WD club trips or tag alongs under their belt. Out There North should also be useful for would-be visitors to get a taste of areas they're considering visiting on an organised trip. So that's yet another level. The book offers no "how-to-get-there" instructions or route directions – that's not a criticism – so would be good to read in conjunction with Andy Cockroft's 4WD North Island series.

Out There North follows an earlier title, Out There South, mercifully not done in a fleet of Amaroks. That book also bypassed 4wdNewz when it came out but a copy is on the way to see how it compares and what we've missed, so watch this space. Update: The copy arrived and is noted below.