A rose by any of its names 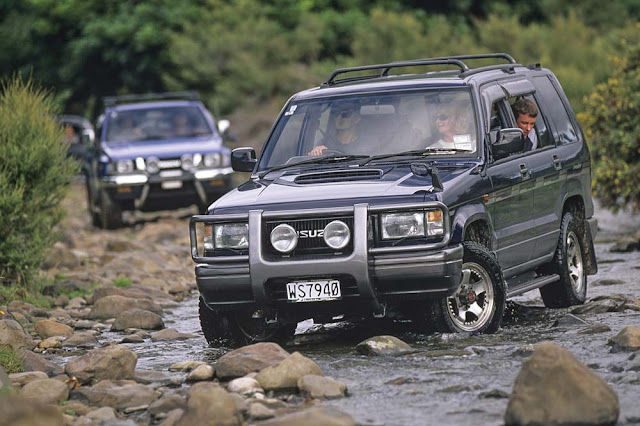 It has to have one of the longest lists of aliases of any 4WD ever, but this Isuzu mid-size wagon is a pretty sweet vehicle, by whichever name it's known. My list of identities for the vehicle, which I think is fairly complete, includes Bighorn, Trooper, Caribe, Acura SLX, Monterey, Jackaroo and Horizon. It's been badged as an Isuzu, a Chevrolet, Subaru, Honda, Opel, Vauxhall and, of course, as a Holden.

The thing about this vehicle is that while it's not outstanding at any one thing, it does everything well, making it a really competent, reliable and durable off-road tourer. For example, the 1993 Bighorn Irmscher in the photo came to New Zealand in 1998 with 88,000km on the clock and has now topped 325,000km! It's the second of three versions. The first, from 1981 to 1991, was angular, tough as nails, somewhat clumsy and hugely underpowered in diesel form. The second and similar third generation, made from 1992 to 2005, were way better, thanks in part to styling and ergonomic input from Opel. Its 3.0 litre diesel was a sweet unit and the V6 was okay, too, if you liked supporting the petrochemical industry.

Some of the keener off-roaders who wanted one of these trucks chose the shorter two-door version that had the advantages of being lighter and more agile.

Wikipedia has a useful history of the type here, and here's an international Isuzu club.
at 11:46 AM