The future of urban off-roading? 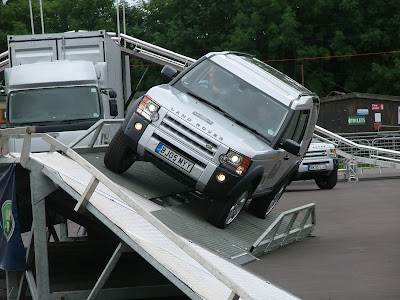 I was at Land Rover's HQ today picking up a Discovery 4 in full Rugby World Cup (RWC) colours and spotted in the yard a trailer that contained a Terrapod, ready to be sent back to the UK. For those who don't know it, a Terrapod is an artificial off-road course developed by Land Rover to show off its products in such places as city centres. The course is assembled like a giant Meccano model and it's quite surprising that it all fits in a relatively small trailer. This Terrapod had been used in Auckland during the RWC, providing rides for the public. (The example in the photo is ripped from the Internet and shows a Discovery 3 at the Land Rover Owner magazine show at Malvern in the UK.) Land Rover NZ was pleased with its borrowed Terrapod and is looking carefully at having one built. And that got me thinking that, with the ever-diminishing off-roading opportunities in and around urban areas, maybe the Terrapod represents the future of our favourite recreation. Even though your truck doesn't get dirty and there's nothing to scratch its bodywork, it's a worrying thought.

Of course, there's a point of view that Terrapods are only for sissies: