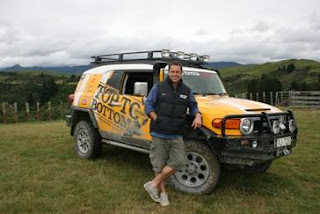 UPDATE: This trip was cancelled in the aftermath of the Christchurch earthquake. A rerun, or something similar, is evidently being planned for later this year.

The interesting Toyota FJ Cruiser is being launched to the media in the Far North Feb 20-21 and will be on sale around the same time. The intro is being tied in with a competition to win a restored original FJ. This giveaway will probably also mark the 60th anniversary of the Land Cruiser, which Toyota is now starting to promote. At the same time, professional celebrity Marc Ellis will drive an FJ Cruiser the length of the country, supposedly all off-road. (see Update below) Such trips have been proposed many times but nobody has been able to negotiate seamless access to tracks without cheating and doing bits on-road. So if Toyota pulls it off, it'll be a real coup.

UPDATE: A Toyota press release today (January 17) says Ellis will drive the FJ Cruiser from North Cape to the Bluff "entirely off tarsealed roads". So that's a bit of a cop-out! The item continues:
"Ellis will set off down Ninety Mile Beach on 21 February. Meeting up with the intrepid travellers at points along the way will be a fully restored Kiwi classic – a late 1970s FJ40 Land Cruiser which Toyota bought from a customer after a long search for the classic and will give away to someone who helps the team achieve its goal.
"Toyota expects the team to take 16 days of driving to reach the southern tip of New Zealand, via seven checkpoints. Ellis is set to meet national and local legends on the way. The vehicles will head south on the North Island’s western side as far as Taranaki, traverse the island to Hawke’s Bay, and on to the South Island via Wellington. From Picton, the FJ Cruiser will go through the centre of the South Island high country and the heart of Otago.
"The FJ40 was restored at Toyota’s Signature Class facility at Thames."

Here's an earlier posting on the FJ Cruiser