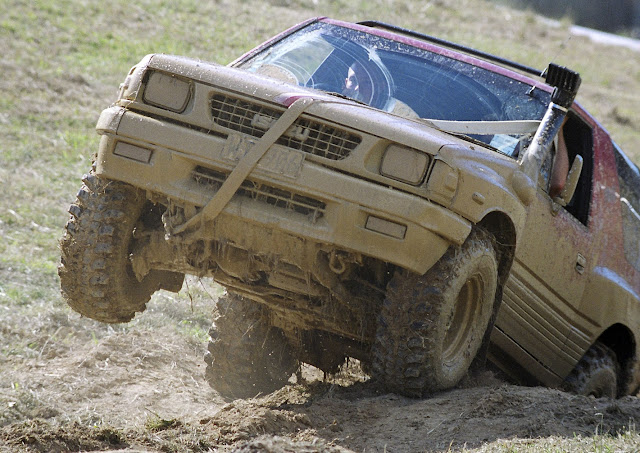 An article I’ve had in my files for years argues that there are only three main rules for good off-road driving. I no longer know where it came from or who wrote it, so apologise in advance for any plagiarism, because the points are sound and worth sharing.

Knowing the vehicle’s ground clearance and what’s underneath. If there’s not much air between the ground and, say, the diff heads the chance of getting stuck on a rough track is good. If there’s something like a transfer case hanging low, learn where it is in relation to the driver’s seat and try to avoid it hitting something. If there are long front and/or rear overhangs, you’ll be unlikely to be able to tackle sharp rises without wrecking a piece of bodywork,

Know where your wheels are. “Be it rocky country, a deeply rutted trail, or a narrow-benched cutting,” the article said, “it’s usually critical to know exactly where you are placing your wheels [even if one's airborne like the Isuzu's in the photo].” I can relate to that one, having over the years had one hit and several near misses due to not knowing.

Be in the right gear at the right time. “If you have the right gear selected for a particular trail, it’s surprising how far you can travel without the need to change gears. Working back from there, it follows that the right gear will take us the greatest distance without gear changing. Clearly, the wider the torque band delivered by your engine, the more this principle applies. But on any typical trail, it is usually possible to travel most of the time in one gear.”
at 8:15 PM