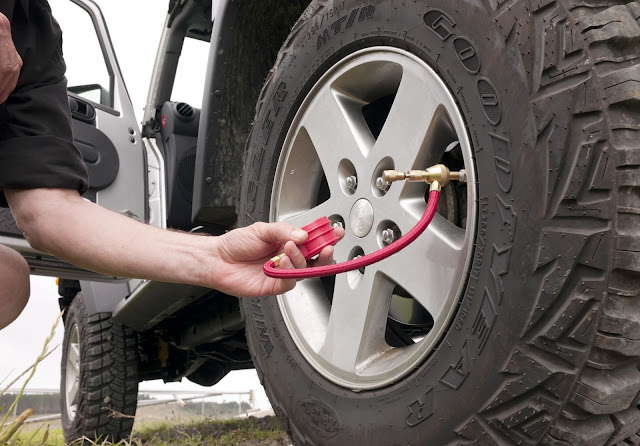 The Australian online magazine Unsealed 4x4 has done a decent test comparison of tyre deflators. It's worth a look if you're in the market for such a device. When the dust cleared, the magazine said the two that stood out were ARB's Ezy (as seen in the photo above) and the Ironman Speedy. Both were both quick, easy to use without any leaks and felt to be high quality with no machining flaws, the magazine said. Opposite Lock was the fastest, and only lost points for having a kink at the base of the hose that would be avoidable with changes to how they ship and package the unit.
They thought the Rough Country deflator was the best bang for the buck. It felt well made, and it was easy to use without any leaks or issues. It would have won if it had been "just slightly more accurate".
The dogs? Unsealed reckoned "you can do better for your money than the Dune Big Red and the Tigerz11 Kwiky. The Dune unit leaked, was stiff and … quite poorly put together. The Kwiky was fairly accurate, but loses major points for a stupid metal O-ring used instead of a decent circlip. It was the only unit on this test that we could pull apart and with very little effort, thanks to the wrong part being used all in the name of saving a few cents per unit."

And the Staun deflators that many off roaders have used? "They are slow, they are expensive and when you put those two facts together it is pretty safe to say the Stauns are outclassed these days by valve core removal deflators. Sure there will be Staun supporters, and the design definitely has its merits. Put it this way though, after doing this test I won’t be buying them again."
at 9:50 AM