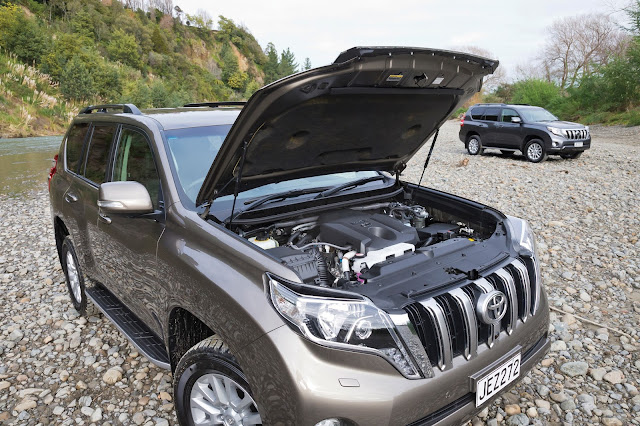 Critics of the Toyota Prado – and believe it or not there are some – tend to zero in on its "old" and "agricultural" 3.0 litre turbodiesel. That's now history with the introduction of a new 130kW 2.8 litre Global Diesel unit, which will also be under the bonnet of the forthcoming Hilux. Maximum torque is up by nearly 10 per cent to 450Nm, low-speed torque is better, and fuel efficiency is improved by almost six per cent, at 8.0 litres per 100km, overall. Fuel filtration has been enhanced with a secondary high pressure filter to protect components. The engine meets Euro 5 emissions standards and has six per cent lower CO2 emissions. The direct-injection engine also has what Toyota claims to be the first use of Thermo Swing Wall Insulation Technology (TSWIN), which is thermal barrier technology that helps the engine achieve a maximum thermal efficiency of 44 per cent.

"By starting with a clean sheet of paper the Toyota engineers were able to use new materials and innovative thinking," said a Toyota New Zealand spokesman. "For example, a more rigid block allowed the number of head bolts to be reduced freeing up space to optimise head port shape for better fuel flow. Higher engine outputs make it easier to drive, especially with new levels of low-down torque." Noise suppression is said to have been significantly improved.

The 4.0 litre V6 petrol engine continues to be available. All variants use a new six speed automatic, sequential shift transmission.