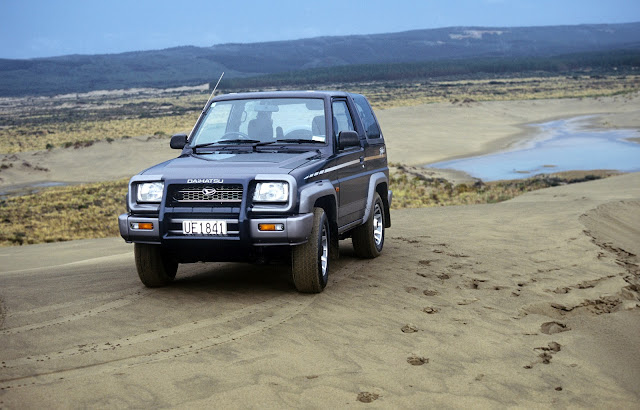 The Daihatsu Feroza's problem was that it came along just before the Suzuki Vitara, a similar light 4WD but with styling that caught the public's eye. So, from 1989, the Feroza was eclipsed by the sexy Suzuki and went out of production with a bit of a whimper in 1998. Mechanically, it was similar to the Vitara, with a 1600cc SOHC engine (carb. but later EFI) and a manual gearbox. Although Ferozas were made with an automatic, 4wdNewz isn't aware of any coming to New Zealand unless perhaps as a used import. Suspension was independent in the front, solid in the rear, supported by coil springs. Such companies as ARB made a reasonable range of accessories but Feroza was never supported by anything like the Vitara's vast aftermarket. Today, a huge range of good gear is available for early Vitaras from such companies as Calmini in the USA, but Feroza owners are largely on their own.

There wasn't much difference between the ability of the two off-road, although the Daihatsu seemed to be slightly more rugged. Because the roof could be removed, with some effort, the Feroza had an integral roll bar at the B-pillar – a comforting feature if something went horribly wrong on a sidling. A wide-track version was introduced for the last few years of production, giving it an extra measure of sure-footedness. It's the version to look for.

Ferozas are not often seen nowadays. Those that survive are generally "well used" and have high mileage. They sell in the $2500-$3500 range.