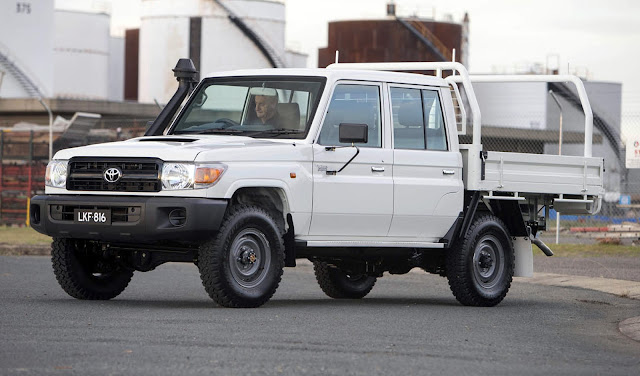 New Zealand is hot on the heels of Australia with a new version of Toyota's Land Cruiser 70 Series workhorse. Arriving here next month, the LC79 is a double cab version of the rugged 70 Series cab-chassis ute favoured by contractors and high-country farmers. The vehicle was developed with Australia’s mining industry in mind and can even be fitted with rail arms to travel on mining train lines. However, the ute has much wider application and a Toyota New Zealand spokesman told 4wdNewz that customers have been asking “for years” for a double cab version.
An aftermarket supplier not associated with Toyota has even been building custom versions from cut-down 70 Series LX station wagons. Toyota Australia said the same thing had been happening over there, providing impetus to do it at the factory. As with the rest of the 70 Series range, the double cab uses Toyota’s powerful 4.5-litre V8 turbodiesel mated to a five-speed manual gearbox and part-time 4WD with a two-speed transfer case. The Euro IV-compliant V8 engine delivers 151kW of power at 3400rpm and torque of 430Nm from 1200rpm to 3200rpm. The double cab has a one-tonne payload and can accommodate five adults.
The LC79 will be offered in two grades, one a basic “working” truck, known as the Workmate in Australia, and the GXL with a range of comfort and convenience gear. This includes alloy wheels, over-fender flares, remote central locking, differential locks, fog lamps, power windows, carpet and cloth seats. Pricing has not yet been set, but in Australia they start at around $NZ78,000. The 70 Series family sells here in small but steady numbers, the single cab cab-chassis averaging about nine units a month, the commodious Troop Carrier wagon version about three a month and the more luxurious LX wagon a couple a month. 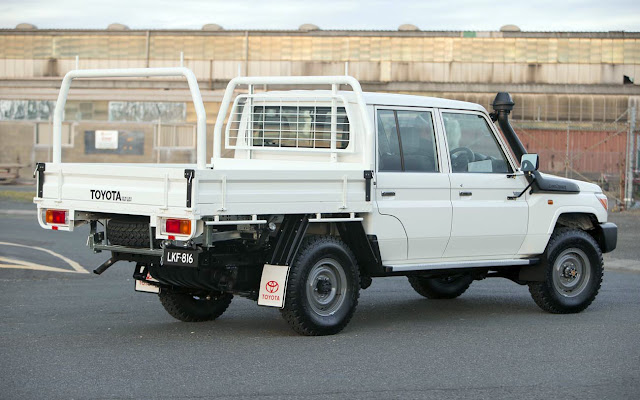