To set the scene, the FJ is built on a lengthened version of the SWB Prado's chassis, has a 3956cc V6 petrol with an automatic five-speed; independent front suspension with a coil-sprung live axle at back; and has part-time 4WD. An electrically-operated rear diff-lock is standard. Overall low gearing is an unimpressive 33.61:1. By comparison, the 4wdNewz Wrangler Rubicon has an overall low of 46.6:1 thanks to a 4:1 transfer ratio. The Toyota's is 2.566:1.  In size, the FJ Cruiser sits roughly between the current Mitsubishi Challenger and the Jeep Wrangler Unlimited, although it's wider than either and has a shorter wheelbase of 2690mm.

Approach and departure angles are 36 and 31 degrees respectively. These are average by today's standards, but well short of a Defender 90's 49/47. At 12.4m its turning circle is kind-of wide and in keeping with such 4WDs as the Wrangler Unlimited and Nissan Patrol (both 12.2m), or its kin the Land Cruiser 70 LX wagon at 12.6m. The rear diff is 235mm from the ground which is okay, but measured on the same spot of ground, my Wrangler offers 25mm more air. (I'm not turning this into a Wrangler vs FJ Cruiser comparison, the Jeep just happens to be handy!) As it rolls from the showroom, the FJ has 265/70 x 17 tyres, in the case of "my" one, Dunlop Grandtrek AT22s, which are somewhere between a BFG All Terrain and a street tyre.

4wdNewz no longer has access to a 20deg ramp to get a Ramp Travel Index, but American reports say the FJ Cruiser scores about 515, which is on the lower end of average.

Here's a collection of earlier posts on the FJ Cruiser. Click "older posts" at the bottom right of the page the link will take you to, for another batch. And here's a good American FJ Cruiser forum, in case you get hooked on the truck.

Update: Toyota has told 4wdNewz that the FJ Cruiser will be facelifted in the coming year, but it's expected to be minor. 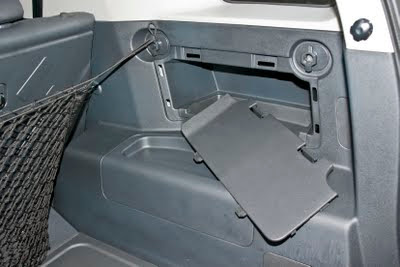