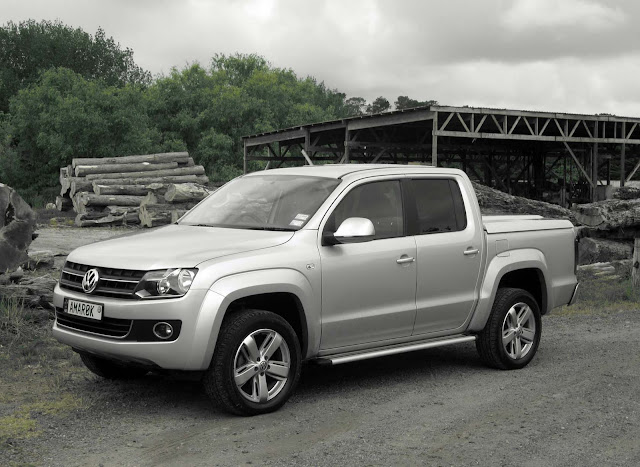 Update: The German ute is being introduced to the media here Feb 14-15. 4wdNewz will be there.

Volkswagen has a few early-production Amarok utes in the country and I've just been backroading in one of the double cab 4WDs. This is the first 4WD utility to seriously challenge the dominance of Japan's products – the SsangYong was a fizzer and Land Rover has only been able to carve a mini-niche with its utes. Volkswagen is gearing up to make the most of its opportunity, adding a bunch of service outlets and new dealers so that customers can have an Amarok, no matter where their paddock. The company's talking 400-450 in the first year and has taken deposits on 130 of them. (Update: one has posted an interesting comment, below.) Built in Argentina – and soon, also, in Germany – the Amarok is competent, slightly larger than most Japanese rivals, and has a good load area. There's an earlier posting here. Its cab is well designed and roomy, with rubber floormats on the base model.

It's powered by a two litre Turbocharged Direct Injection (TDI) common rail diesel developed from the unit in Golf, Jetta and Tiguan. The 4WDs use a bi-turbo version that produces 120kW and 400Nm of torque from 1500rpm. An entry-level 2WD will have a lower powered version with 340Nm. The twin turbos eliminate lag and provide possibly the smoothest-performing diesel ute on the market. The 400Nm of torque is more than enough, despite what some rivals will claim, but I'm wondering whether it has quite enough kWs? The ute will first be available only with a six speed manual, but an auto is expected late next year. The ratios are well chosen and the ’box a pleasure to use.

Volkswagen has worked out indicative pricing that puts the leather-upholstered Highline 4WD double cab at $62,000 compared to $60,390 for the equivalent Hilux. The lower-line model is $56,800 compared to Toyota's $55,690. These  numbers may change by the time the trucks arrive, but were it my money, I'd gladly pay the extra for the Amarok at those prices, but the reality is that when the respective brands' salesmen have finished playing their discounting game, the Japanese product is likely to be significantly cheaper and, despite VW's efforts to extend its network, has a far deeper sales and service network. However, the Amarok deserves a place in our market and 2011 will be one of the most interesting years ever to watch how the ute market evolves.