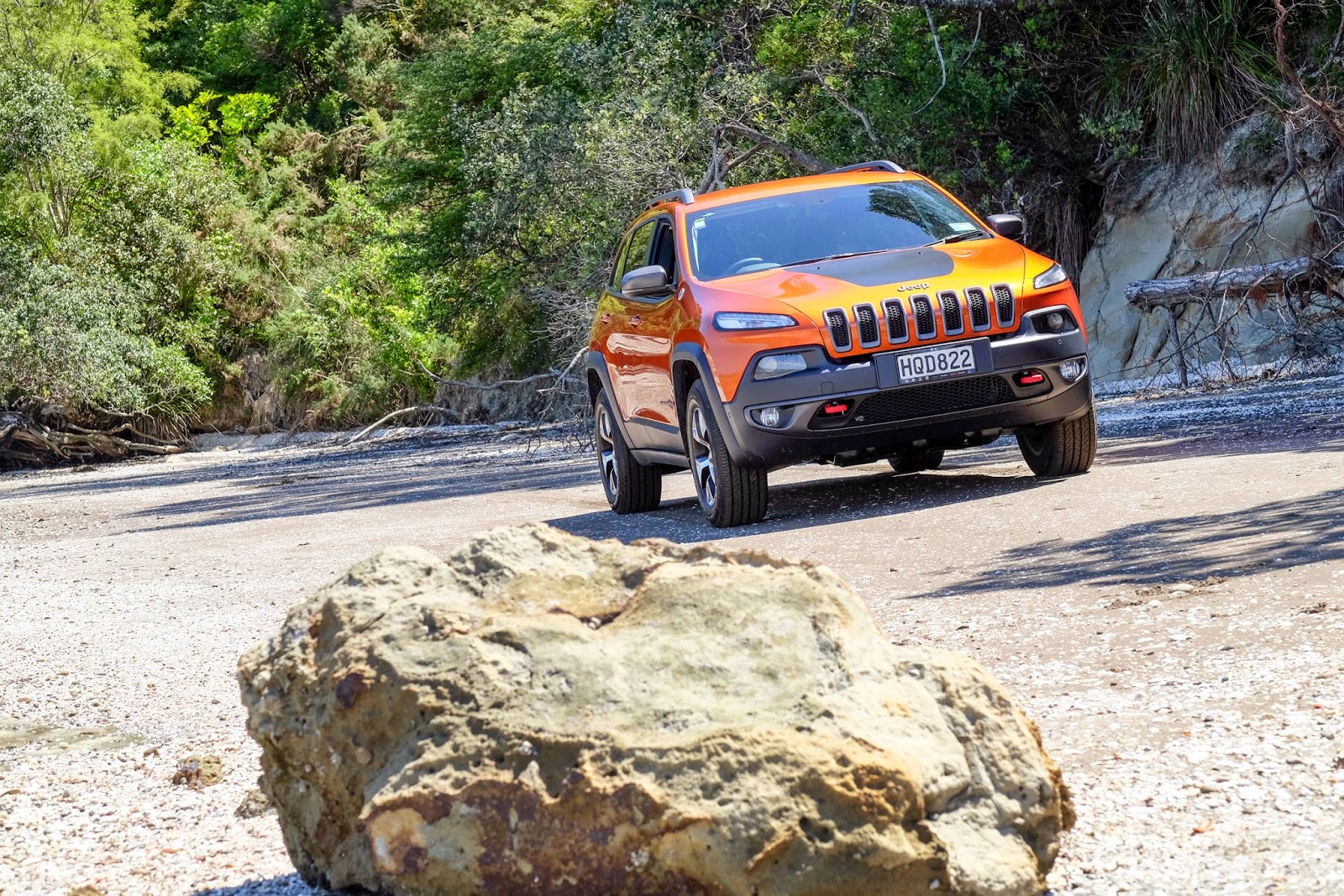 At first glance, the latest Jeep Cherokee seems to have little for the 4WD enthusiast besides its famous name. The catalogue is full of 2WD models and others without low-range gearing – until, at the end of the list, there's the Trailhawk. This is the version that costs the most ($65,990 at the moment) and has the most gear, literally and figuratively, of interest to off roaders. Here's a vehicle that not only revives the spirit of the XJ that established Cherokee in New Zealand but takes the model's off roadability to a new level, thanks in part to a standard rear differential lock, part of a package that Jeep calls Active Drive Lock. Power, in this top version, is from the 200kW/316Nm 3.2 litre version of Chrysler's alloy Pentastar V6 that carries a 10 litres per 100km overall fuel consumption rating. Like the Wrangler Rubicon, a diesel apparently isn't going to be offered for the Trailhawk. 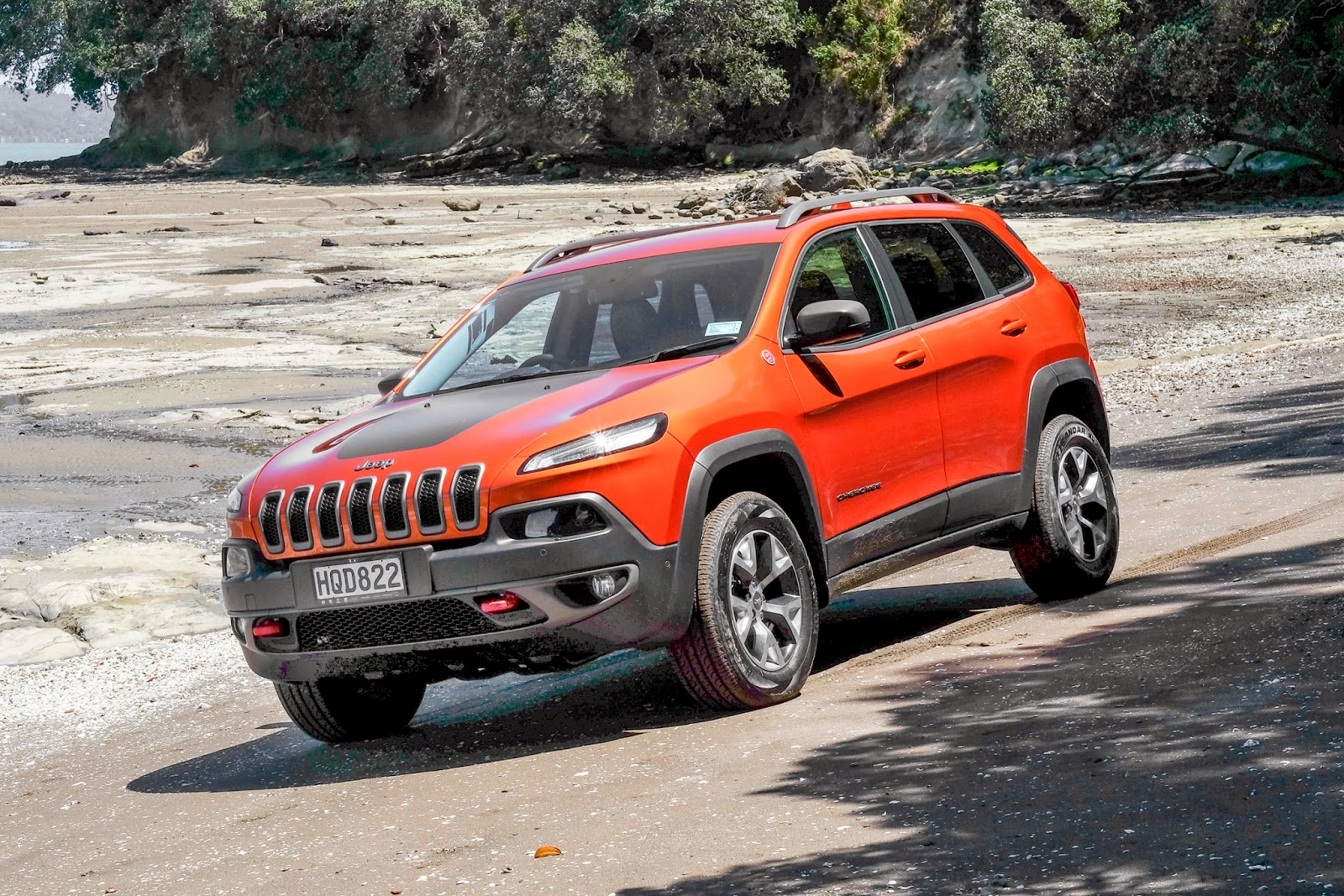 The KL Cherokee uses a ZF designed nine speed automatic that's useful on or off the road. Instead of a normal transfer case, a "Power Transfer Unit" splits the torque from the gearbox to the front axle and rear axle. In low range, this gizmo multiplies torque through planetary gears at the front and rear axles. Factoring in the 2.92:1 transfer reduction and the diff ratio, overall low is a quite decent 44.7:1. Automatics with low range tend to have a so-so overall low of around 33:1.

Ground clearance of "lesser" KLs is quoted as 185mm, but the Trailhawk tiptoes over rocks with an extra 36mm. Not only that, the underbody has some of the best protection you'll find on a factory-fresh 4WD. Fording depth is only 508mm – but that's much the same as what a Land Rover Defender offers. The ’hawk also gets a wider track and different bumpers, the latter to improve approach and departure angles. However, these angles  are still a relatively modest 30deg and 32deg, respectively.

Trailhawks sit on 245/65 R17s, Yokohama Geolanders in the case of the vehicle 4wdNewz tried, but they'd have to go for any serious off road work. A fair turning circle of 11.6m combined with good outward vision make Trailhawk reasonably nimble and handleable in tight spots.

A rotating dial on the console controls off road functions, such as low range selection and diff lock. The various off road "modes" are selected by an adjacent button and include the usual offerings, such as mud, sand or rocks. It all works easily and instinctively. The electronic parking brake comes on the moment the transmission is put into Park; it's probably supposed to be a safety feature but is a nuisance off the road. Unlike some similar systems that release when the accelerator is touched, Cherokee's requires a foot on the brake and the flick of a console mounted switch.

Trailhawks are nicely fitted out and finished, right down to leather seats and contrasting stitching on the dashboard. It's a nice vehicle to drive on the road and distinctive styling sets it apart from the crowd. The nose shape will provide the aftermarket with a challenge to design a bumper that integrates well. Still, the KL is a huge improvement over its awful squared-off predecessor, the KK. 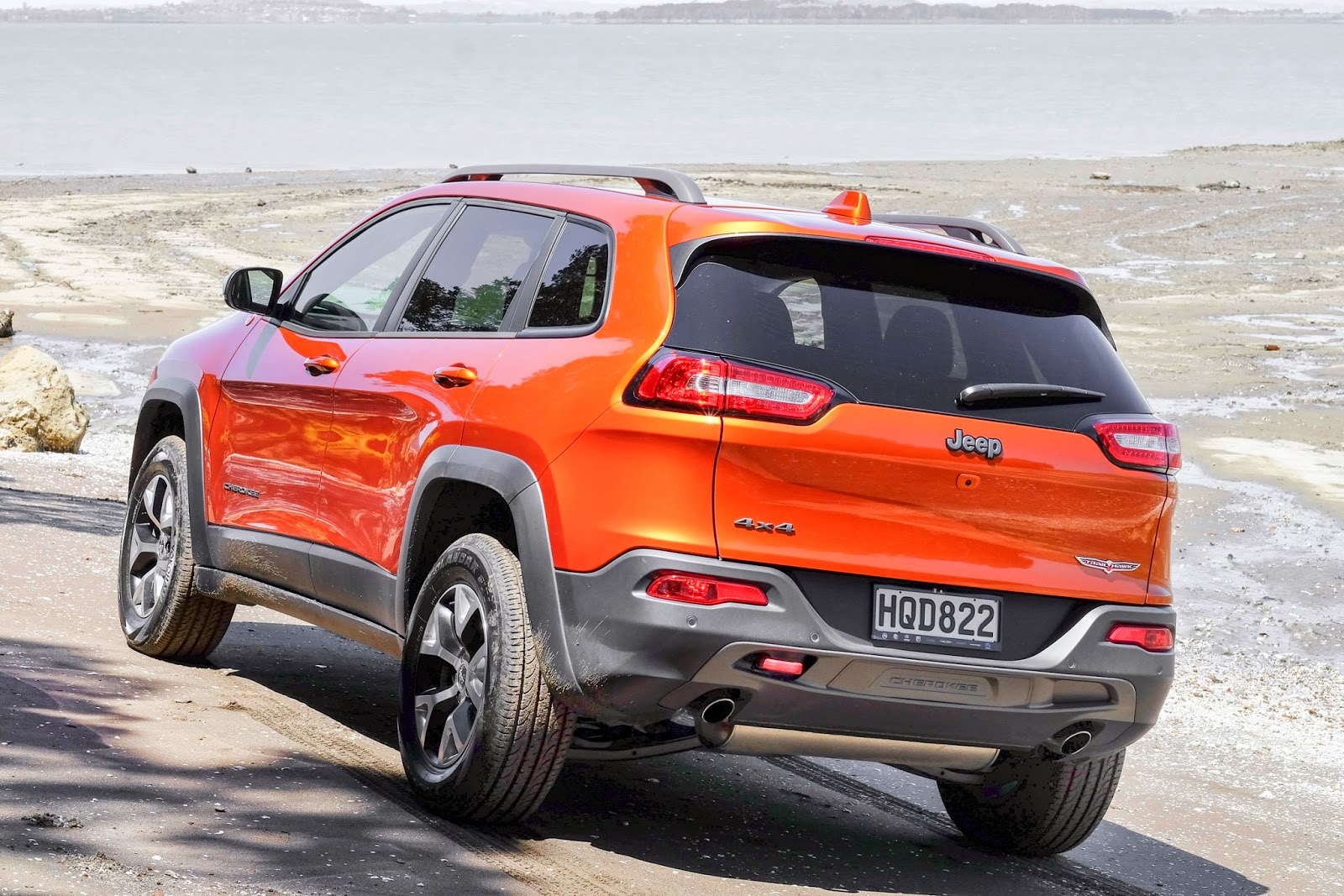