Why the Duzgo went 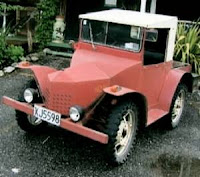 Comedian Billy Connelly brought it to the world's attention during his tour of New Zealand TV series, and it's recently had another re-airing in the Sounds Historical programme on National Radio – which just goes to show that no matter how hard the bureaucrats tried, you can't keep the Dugzo down. The, um, unusual looking vehicle was developed and produced as the ideal off-road farm vehicle, by two brothers trading as the Duzgo Car Company, of Whataroa in Westland. It performed so well on their farm that word got around and and others wanted a copy of their own.
Apart from the bodywork, bent from new steel, everything else was recycled – a bit of Morris here, a bit of Austin there – but the Customs department of the day deemed those that came off the "production line" to be new vehicles and demanded 30 per cent sales tax on the 10 that had been built.
The company lacked the financial resources to pay and closed – with 15 unfilled orders. An eleventh, partly built, was scrapped, possibly because the Customs men suggested it should be finished and sold to help pay their demands. So much for regional incentives, then.
The Duzgo mainly used a single-cylinder Kohler engine producing 12hp and drove through two gearboxes 12 forward speeds and three reverse. Its lightness, knobby motorcycle tyres and having the right gear for any occasion gave it excellent performance in muddy farm conditions. Although some sources describe it as a 4x4, it was rear-drive.
One Duzgo owner, "Possum" Pete Salter, told 4wdNewz: "When it has been stuck, you can put it in first, put a weight on the pedal, get out and push it out, then walk along side and climb back in." You can see his 1978 Duzgo, the eighth built, at Pukekura, 35 minutes south of Hokitika.
at 10:05 AM